Discover things to do in Calingasta Valley, San Juan.

The Calingasta Valley is formed by the Los Patos River, a wide and crystalline watercourse that accompanies the circuit along Route 149 in the west of the city of San Juan.

This valley is characterized by its arid landscapes, the small towns along the way surrounded by poplars such as Barreal, the foothills that keep watch at all times and a clear sky during the day and starry at night.

It is worthwhile to travel the entire route 149 from its beginning, 20 kilometers from the city of Talacasto, to at least El Leoncito Park. The entire circuit is paved and has impressive scenery, between hills and the San Juan and Los Patos rivers.

🔝 Take a look at this article if you are also traveling to San Juan Capital.

Here we tell you what to do in Barreal, one of the most beautiful towns in the Calingasta Valley in the province of San Juan.

Map of things to do in Calingata Valley, San Juan.

One of the best routes to visit Barreal is to turn off Route 40 at Talacasto and take Route 149. Although it is only 210 km from San Juan to Barreal, there are almost 4 hours of travel time due to the curves and switchbacks of crossing the mountains. So if you want to visit in the day from the provincial capital, it is possible but you will have to get up early to travel at your leisure.

In the map we show you the main places we visited in the Calingasta Valley, from the confluence of the Patos River with the San Juan River to the border with the province of Mendoza (which in our case, was the next destination).

Our visit to Barreal and the Calingasta Valley was part of a 3 month trip through central and northern Argentina which is summarized here: Matetrip Argentina.

1. Things do in Calingasta Valley

With a little more than 2000 inhabitants, the small town of Calingasta is worth a stop.

From Route 149, before crossing the bridge at the entrance of the Patos River, there are several viewpoints where you can park your car and contemplate the views of the town and the foothills in the background.

Calingasta is a very quiet town that can be easily traveled in an hour. The city’s tall poplars provide shade and shelter from the intense heat, and at the same time, a picturesque touch to the place.

📷 Check here the Calingasta Valley tour from Barreal and make a reservation. You will visit the city of Calingasta, the Siete Colores and Alcazar hills, and two San Juan wineries with wine tasting.

Among the places to visit in Calingasta city, there are two that stand out:

On the side of Route 149 and a little bit of before reaching Cerro Alcazarare the following Ruins of Hilario and it is the remains of one of the first silver ore smelters in the country, under the government of Domingo Faustino Sarmiento (the so-called father of education in Argentina).

The pity is that they are closed to the public, behind a precarious fence and without signage to learn a little more about the history of this place. You can only stop along the route to take some pictures of its photogenic adobe chimney and if you feel like it, you can walk around on your own.

They may later open them to be incorporated into a mining circuit in the province of San Juan that will have gold as a protagonist. You can find out more about these ruins in this very interesting document we found on the internet. 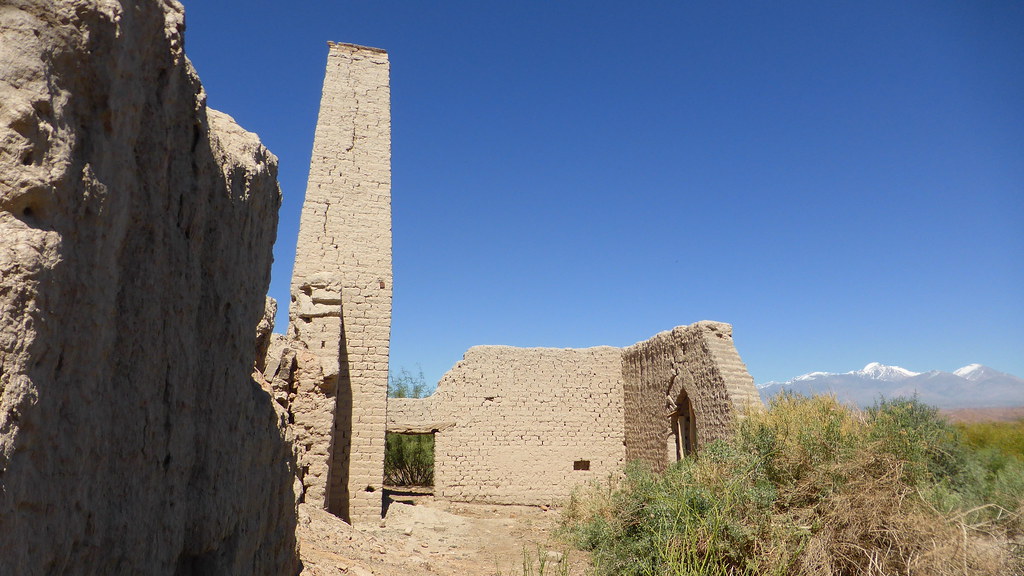 3. Cerro Alcazar, one of the things to do in Barreal.

Between the towns of Calingasta and Barreal, take a short detour of less than one kilometer on Route 149 to reach the fabulous Alcazar Hill. It is a gravel road that can be traveled by car without problems.

This mountain formation stands out for its shape and colors. With different shades of yellow, white and brown, it has the shape of a castle or castle, hence its name. The erosion produced by the wind has given it this particular shape.

The hill is the site of the Concierto de Las Américas, an open-air musical and dance show that takes place in April.

Make a route through San Juan and Mendoza for one or two weeks. Check out our article!

4. The city of Barreal

Barreal has become one of the main attractions to see in the Calingasta Valley, as it still preserves its charm and tranquility.

Along the Andes mountain range that can be seen in the background from some of its viewpoints, we can observe several mountain ranges, the one of Espinacito, the one from La Ramada and Ansilta with high mountains over 6000 meters high, such as Mount Mercedario and also to the south and in the distance, the great Mount Aconcagua, the highest in America.

To appreciate the mountain backdrop in its fullness from the banks of the Patos River, you must go to the end of Echevarría Street, where the viewpoint is located. In the place there is parking for vehicles and tables and benches to sit and enjoy the beauty of nature accompanied by a mate. We went both at sunset and during the morning, in both cases it is worth it. But don’t stop exploring, every nook and cranny is a place to sit and enjoy and contemplate the incredible natural surroundings.

In Barreal, there are also many outdoor activities to do, from hiking, rafting, trekking, and scenic drives in Pampa el Leoncito, which we will see below.

📷 Check here for the petrified forest excursion and reservation. An off-road tour through the Tontal foothills.

At 20 kilometers south of Barreal and on the side of route 149, Pampa el Leoncito is a large plain of 18 kms of extension at the foot of the mountain range, where the wind makes itself felt.

It is characterized by the absence of vegetation, which transforms it into a dry, smooth and cracked soil. If we add to this the wind, it makes it an ideal place for the practice of windsurfing, a kind of windsurfing but on land. Sailing cars move quickly on site thanks to the strong winds.

📷 Check here the excursion to El Leoncito National Park and make a reservation. In addition, you will hike to the El Rincón waterfall and visit the Cesco Astronomical Observatory to contemplate the stars.

Right in front of Pampa El Leoncito is the access to El Leoncito National Park, a place to see autochthonous flora and fauna and to camp in the authorized areas.

The same route that goes into the national park leads to the El Leoncito Astronomical Complex (CASLEO) and the Dr. Carlos Cesco Astronomical Station. The observatories have been installed in the area thanks to the low pollution of the skies at the site, which allows perfect visibility more than 250 days a year.

The observatory can be visited both during the day and at night. Daytime visits are available from 10 a.m. to 12 p.m. or from 2:30 p.m. to 5 p.m. without previous reservation. The guide gives an explanation of the whole place, the rooms where the data are taken and the remote accesses are given, and finally, the bottom of the telescope is accessed.

For the night tour, reservations must be made in advance. The night visit includes astronomical observation through a telescope, and as options you can also hire dinner, lodging and breakfast at the site.

📌Further information can be found on the official website of the CASLEO observatory.

Where to stay in the Calingasta Valley

Most of the lodgings are located in the town of Barreal, which is the most touristic area.

One of the best lodging options in Barreal is Posada Paso de los Patos. It has a swimming pool, mountain views, restaurant and a spectacular breakfast. You can book from here.

In Calingasta city, Hotel Nora is one of the few lodging options. It has a swimming pool, simple rooms and an excellent treatment from the owner. You can book from here.

🏨 Do you want to look for other options? Find here the best hotels in Barreal.

How to get to Barreal and the Calingasta Valley

If you travel by car, the best option to reach the Calingasta Valley from San Juan Capital or from the north is Route 40 and then take the detour to Talacasto. The entire road is paved and in good condition. You have to go slowly because there are many curves and counter-curves.

The other option is from Uspallata in Mendoza along route 149, but keep in mind that there are 70 kilometers of gravel road that are not in such good condition, at least when we did it.

🔝 Keep an eye on this article if you are traveling to Uspallata along route 149.

If you want to get to the Calingasta Valley by bus, the company El Triunfo has one or two buses per day that make the trip from San Juan capital.

By plane, the nearest airport is San Juan Capital. From here, you have to rent a car or go by bus to the Calingasta valley.

Did you like our article about things to do in the Calingasta Valley? You can leave us a comment or share it on your social networks.