We continue touring Switzerland and today it is the turn of the federal city of this country. If you are interested in things to do in Bern in 1 day, read on and we will tell you all about it.

Bern is the capital of Switzerland and is located in the northeast of the country. It was built in the 12th century around the river Aar and, today, in some parts of the city retains its medieval style.

The main icons of the Swiss federal city are the Zytglogge clock tower, the old town, the Federal Palace and the Paul Klee art museum.

But these are just a few of Bern’s dozens of tourist attractions. This city offers entertainment for all tastes, from museums, history and architecture, to huge parks and viewpoints overlooking the city.

The idea of this article is to give you a variety of options so that you can tour the city and get to know those points that are most interesting to you.

So, without further ado, here is a suggested itinerary to visit Bern in 1 day.

🔝 If you are going to travel around the Swiss country, you will probably be interested to know. things to do in Switzerland in 4 days.

As we mentioned above, there are many things to do in Bern and perhaps a single day’s tour is a bit tight to see everything.

In this article we will tell you about the 7 best tourist attractions in Bern and guide you to build your itinerary according to your interests.

The activities we selected are:

If you are interested in history and architecture, we recommend a visit to the old city, the parliament, the clock tower, the History Museum and the Bern Cathedral.

In case you are an art lover, the Paul Klee museum should definitely be on your itinerary and you can combine it with the old city.

Now that we are done with all this introduction, we will tell you a little more in depth about the best places to see in Bern in 1 day.

1) Walking through the old city of Bern

🔘 Check out the rest of the World Heritage Sites we have visited.

We begin our tour of the best sights of Bern with a key point of the city; Altstadt or old town in English.

The historic center of Bern was declared a UNESCO World Heritage Site in 1983 thanks to the preservation of its ancient medieval architecture.

Most of its buildings were built around 1191 on a hill surrounded by the river Aar.

Although the old city suffered a fire in 1405, during its reconstruction the medieval style was respected and the architecture of its buildings was preserved as much as possible.

Altstadt is known as the“city of fountains” because it contains more than 100 water fountains distributed throughout the area.

In my opinion, the Old Town is a must stop for anyone who decides to tour Bern.

Do you plan to visit other Swiss cities? Here we tell you things to do in Zurich in 3 days.

The Zyrglogee clock tower is one of the icons of the city and therefore one of Bern’s main tourist attractions.

It is one of the most interesting astronomical clocks in Europe and its name comes from the Swiss dialect, translated as “bell of time“.

The clock tower is located on the main street of the old city and rises among the surrounding buildings, making it impossible to overlook when touring Bern.

For some time, Zyrglogeetrum was used as a women’s prison, but after the fire that destroyed the city in 1405, it was completely destroyed and had to be restored.

At the bottom of the tower, there is an arcade through which you can walk, which in ancient times served as a gateway to the city.

If you look at the clock, the back of the clock shows a planisphere divided into three zones representing the three times of the day; sunrise, sunset and sunset and around it, you can see a metal frame that refers to the zodiacal signs.

You may be interested to see this article where we tell you about things to do in Lucerne in 1 day.

For art lovers, visiting the Zentrum Paul Klee should be one of the top things to do in Bern.

In case you didn’t know, Paul Klee was a well-known Swiss painter who dedicated himself to abstract, surrealist and expressionist works of art.

This art museum houses more than 4,000 works of this famous painter, distributed in very spacious rooms that allow you to walk around and admire each painting at your leisure.

But the Zentrum Paul Klee is not only a simple building with paintings inside, but the architecture of the place is something that attracts the attention of tourists.

This building was designed by architect Renzo Piano, who gave it a modern style with undulating shapes. An extremely peculiar and attractive architectural work.

To enter the Paul Klee museum you will have to pay an entrance fee upon arrival and if you wish you can buy an audio guide.

✏️ The audio guides are only available in English, French or Italian and the information signs next to the works are in German. 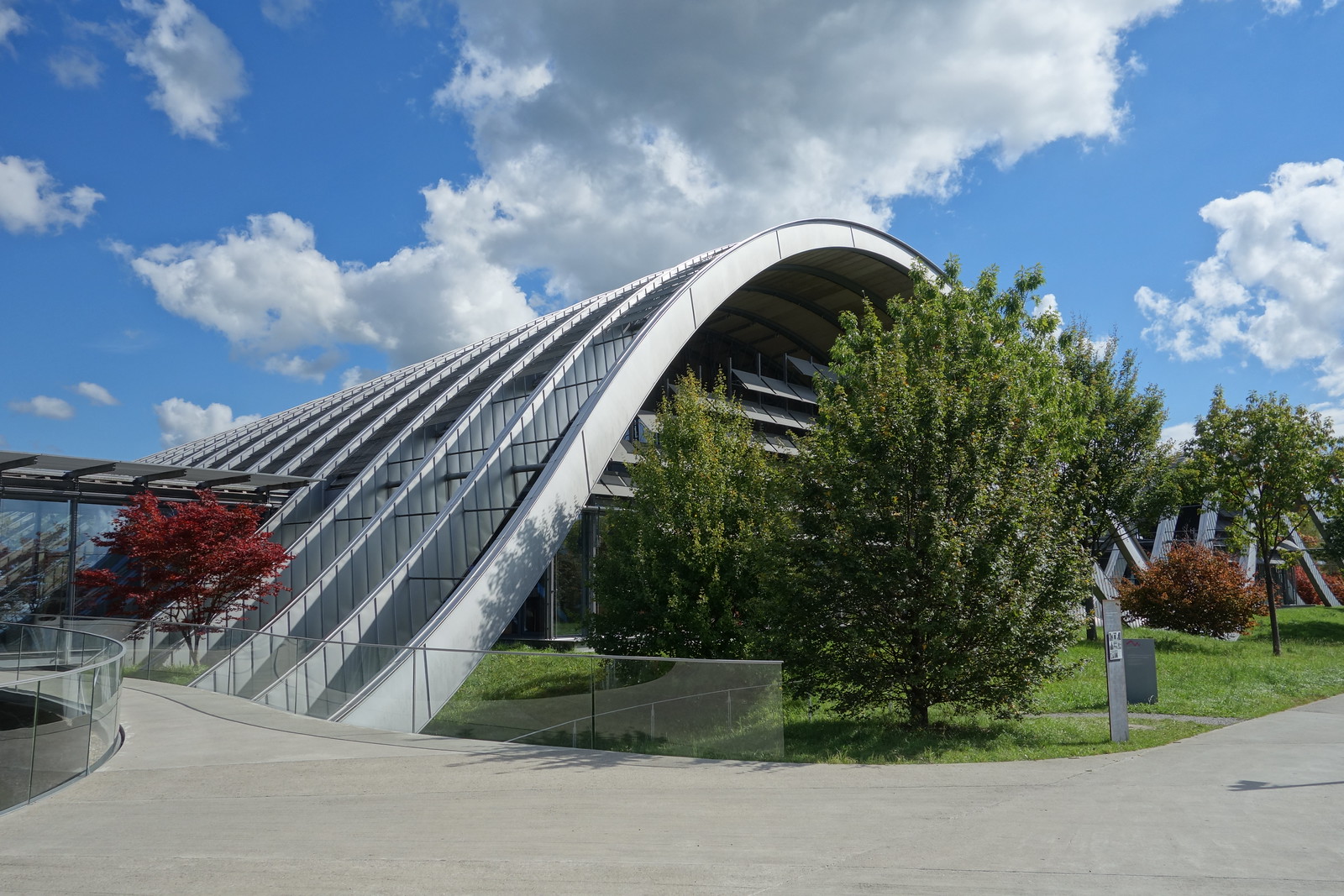 The Bern Cathedral, or Munster, is one of the city’s most emblematic buildings and is known for being the tallest religious center in Switzerland, with its main tower measuring more than 100 meters.

It is definitely one of the must-see stops when touring Bern, as it is incredible both inside and out.

Its architecture is Gothic in style and on the outside you can see arches and carved religious figures and on its main door you will find a representation of the Last Judgment.

Inside, you will see huge domes with gilded details and stained glass windows overlooking the city.

But, definitely, the most incredible thing about this building is when you climb its tower, from where you can get panoramic views not only of the city of Bern, but also of the snow-capped peaks of the Oberland.

✏️⚠️ You do not need to pay an entrance fee to enter the cathedral, but if you want to climb the tower or take a guided tour you will have to pay for it.

On the outside of this beautiful cathedral, don’t miss the Münster Platform, which is a beautiful garden with benches, trees and a viewpoint on the south side of the city where the river Aar flows. The views of the low houses with their orange roofs contrasting with the turquoise river is beautiful.

The Swiss Parliament, located in the center of the old city, is a Florentine-style building and a must-see when touring Bern.

It was built at the beginning of the 20th century and is the seat of the Swiss Federal Parliament, where the country’s politicians meet to make important decisions.

Inside the building you can see large stained glass windows, located on the ceilings and walls, and various paintings.

At the front of the parliament, you will find a water fountain and at the back, you can access a garden with a beautiful view of the river Aar and the mountains surrounding the city of Bern.

The Federal Palacehas its doors open for those who wish to tour its rooms, so you can access a tour and not miss anything of your tour.

Admission to the Swiss Parliament is free, so anyone can visit the building, but it is important to note that you will be allowed to enter if parliament is not in session.

🔝 Get to know one of the most picturesque villages in Switzerland. Here we tell you things to do in Interlaken in 1 day.

The Bern History Museum is the second most important historical museum in Switzerland and therefore an excellent place to get a closer look at the most important events in the country.

For all this, and also for the beauty of the building, we decided to include it in this list of the best places to visit in Bern.

Within the museum’s exhibits, you will find collections related to the history of Switzerland from prehistoric times to the present day.

It also contains some pieces from Egypt, America, Asia and Oceania.

One of the most important exhibitions of the museum is that of the renowned scientist Albert Einstein, where different documents and objects that tell the life and work of this physicist are displayed.

It is important that don’t confuse the Albert Einstein Museumwhich is located inside the Museum of History, with the Einstein’s Housewhich is another building where the scientist lived for a few years while working as an employee of the patent office, very close to where the Zytglogge watch.

This clock played a very special role in the theory of relativity. To explain his famous formula E=MC2 he said that if he were on a train traveling at the speed of light, his clock would run at normal time, while the Berne clock would not have moved a second.

In the house there is an exhibition where you can find period furniture, paintings and documents.

Of course, if you are interested in the life and work of this famous physicist, you can visit both places.

It is important that you go with time to visit this museum as it is very large and it could take you a few hours to go through it completely.

7) Bridges and viewpoints along the Aar River.

The historic center of Bern is located on a hill that surrounds the course of the Aar River, so it will be normal in your tour to find beautiful bridges that cross it.

What do you need to pay attention to?

🐘 As a traveler you should be watchful, be aware of possible abuses of animals during your holiday, not participating in them. We also encourage the tourism industry to identify practices that put animals at risk and to make informed decisions to avoid promoting them.

Useful facts for your trip to Bern

🚑 Take a look at these tips to choose the best travel insurance (updated to 2022) according to the type of traveler you are and, in addition, it will help you clear up the most common doubts. Travel safe!

Where to stay in Bern?

The largest hotel offer in the Swiss capital is concentrated in the historic center, from the central train station to the river.

Other articles that may help you to plan your trip to Switzerland:

Now we finish this article where we tell youthings to do in Bern in 1 day and we detail the characteristics of the 7 places you should not miss.

We hope we have helped you plan your Bern itinerary. As always, feel free to leave us a comment if you have any questions.