Thinking about visiting the Valencian Community? Then you can not miss the 10 most beautiful villages of Castellón province.

The province of Castellón has beautiful villages in the middle of the mountains and by the sea. With a lot of history in its entrails, which goes back to the golden age of the Templars, the Arab conquest and later the Christian reconquest, you will find yourself walking among medieval houses built in stone, fortresses that served as shelter and panoramic views of the surroundings countryside.

Although there are many more charming villages in Castellón, we have tried to summarize below the ones we have liked the most on the route by car. Let’s discover them!

Map – 10 of the most beautiful villages of Castellón

Culla is one of the most beautiful villages of Castellón and is part of the Templar route that had its preponderance in the area during the 13th and 14th century. In this village the Order of the Temple settled in the Crown of Aragon in 1303 until its disappearance. Although there are only remains of the old Muslim castle of the 13th century at the top of the village, the narrow cobbled streets and houses with stone walls and red roofs make the place a real gem.

There is a walking route designed to visit all the attractions to see in Culla in about 2 hours. On this route it is worth stopping at the viewpoints to the mountains, the 17th century church and the old prison that still retains the original chains and drawings of the convicts on the walls. And of course, once at the top of the ruins of the castle, contemplate the breathtaking view of the surroundings.

🏨 Check these hotels in Culla.

Vilafamés is listed as one of the most beautiful villages in Spain, and you will find out why. Its labyrinthine streets with slopes, the decoration of the facades of the houses with pots and plants and the 2 large old buildings of the castle and the church of the Assumption divisible from the lower part of the village, make this town unique.

The circuit to visit Vilafamés starts in the Plaza de las Fuentes. Then go up and pass by the so-called Roca Grossa, a large stone that seems to barely hold to the ground and is the symbol of Vilafamés. At the top of the hill, and after contemplating the beauty of the narrow streets, the remains of the castle of Arab origin await you, of which only a tower remains standing from the Carlist wars and the church of the Assumption, originally from the 16th century, in baroque style and with a beautiful altarpiece and frescoes.

🏨 Check these hotels in Vilafames.

Ares del Maestrat is one of the smallest villages of Castellón inland, but there is a reason why it is very picturesque: it is located 1,200 meters above sea level and the postcard from the viewpoint of the CV15 route before reaching the village is really fascinating, as it seems that the houses and the castle are hanging on the mountain.

The route to visit Ares del Maestrat can be done in just one or two hours. Starting from the main square, follow the circular path along the rock where the ruins of the castle are located, until you reach the imposing viewpoints of the mountains. Descending from the castle is the beautiful church next to the square.

Morella is one of the towns in Castellón that has best preserved its walls, where the old gates and access towers such as San Miguel remain. The great postcard of the town is the castle located in the highest part of the hill, to which you have to climb a lot of stairs and slopes to reach it. Although only some old rooms of the ancient Arab fortress are still standing, the views from the top of the village and the mountains are spectacular.

At the foot of the castle there are two historical monuments such as the Convent of San Francisco and the Archpriestly Basilica of Santa María la Mayor. Morella is one of the towns that is worth spending at least a whole day to know all the attractions and get lost among the small streets as Blasco de Alagón, the most picturesque and commercial, or stairs that cross the old town from top to bottom as the slope of Sant Joan.

🏨 Check these hotels in Morella.

Peñíscola is not only one of the most beautiful towns in Castellón and Spain, but also keeps the history of Pope Benedict XIII, called Pope Luna. He lived in the castle during the so-called Western Schism. From here he wrote the bulls, treaties and wills of the Catholic Church. The castle of Templar origin is very well-preserved with its parade ground, church and outbuildings where Pope Luna spent his time.

In addition, the entire walled old town is nestled on a rock 60 meters high and on the shores of the Mediterranean. You have to get lost in the narrow streets where the white and blue of the houses have their preponderance. The views from the castle to the sea and the beach leave more than one open-mouthed.

🏨 Check these hotels in Peñíscola.

🌟 Did you know? Morella, Peñíscola, Culla and Vilafamés are part of the network of the Most Beautiful Villages of Spain, an association whose purpose is to promote, disseminate, encourage and preserve the cultural, natural and rural heritage in geographical areas with lower levels of industrialization and population. More information here.

Very close to Castellón de la Plana, Onda is not one of the most visited towns but for us it is very worthwhile. Its main attraction is the castle located in the middle of the city, whose walls and some of its towers are still preserved in perfect condition. From the top, the views of the city and the surroundings are very beautiful. Inside is the Museum of Archaeology and Local History.

In the old town, you should get lost in the streets and visit Almudín Square and the Church of the Assumption, both witnesses of the past. One of the main places to see in Onda is the Manolo Safont Tile Museum, which shows through history and objects the art of the Valencian ceramic industry, which is and has been very strong in this area.

🏨 Check these hotels in Onda. 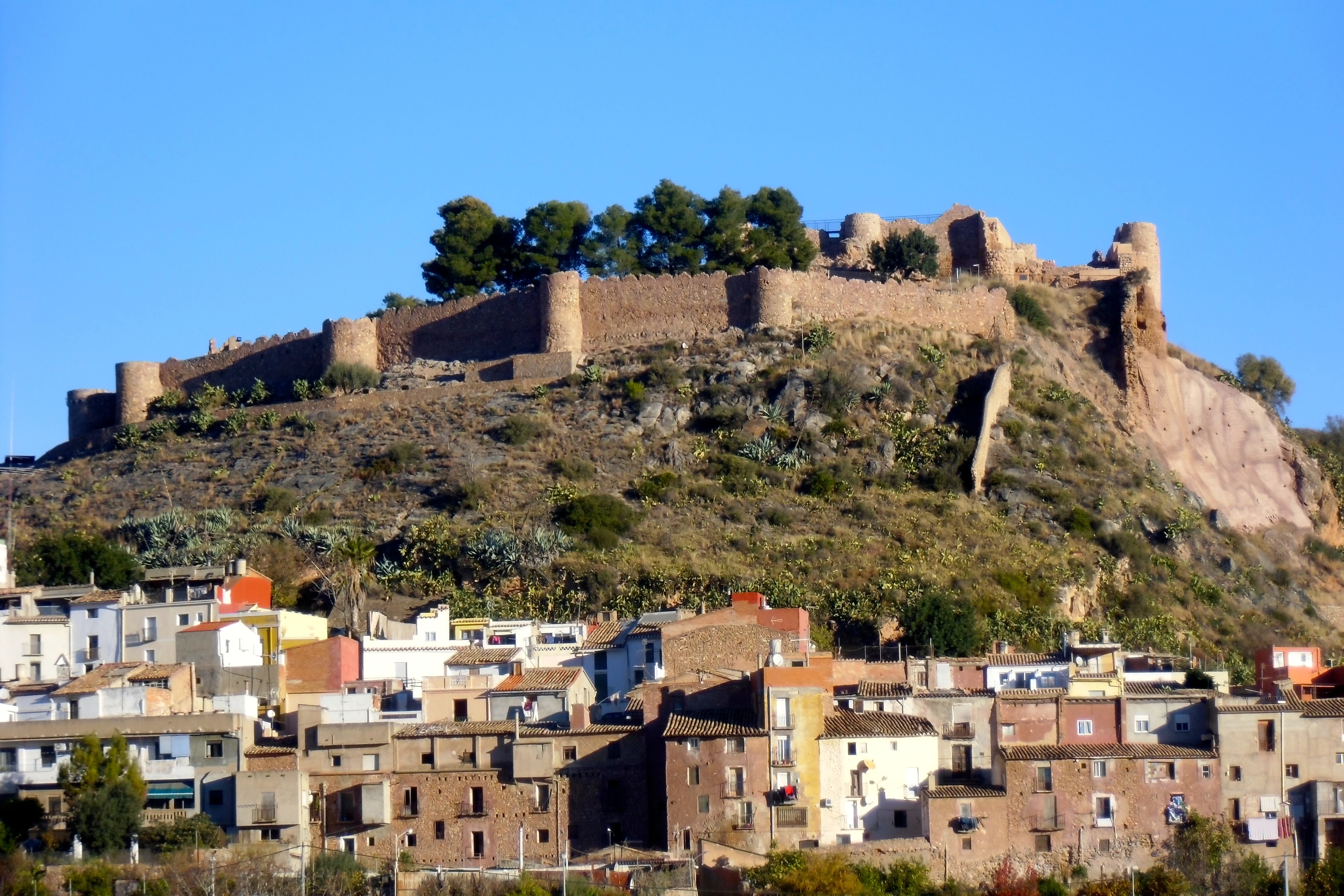 Another town to visit in Castellón is Villafranca del Cid. On top of a hill, the Portal San Roque, dating back to the 15th century, welcomes visitors to the old walled area of which today there are only vestiges. The village has no castle, but it does have medieval buildings of great interest such as the Church of Santa Maria Magdalena, which preserves a 15th century altarpiece and a parish museum.

The main distinctive feature of Villafranca del Cid is the Museum of Dry Stone, a type of construction used by the ancient inhabitants of the town and served to separate the land and as a shelter from the rain. 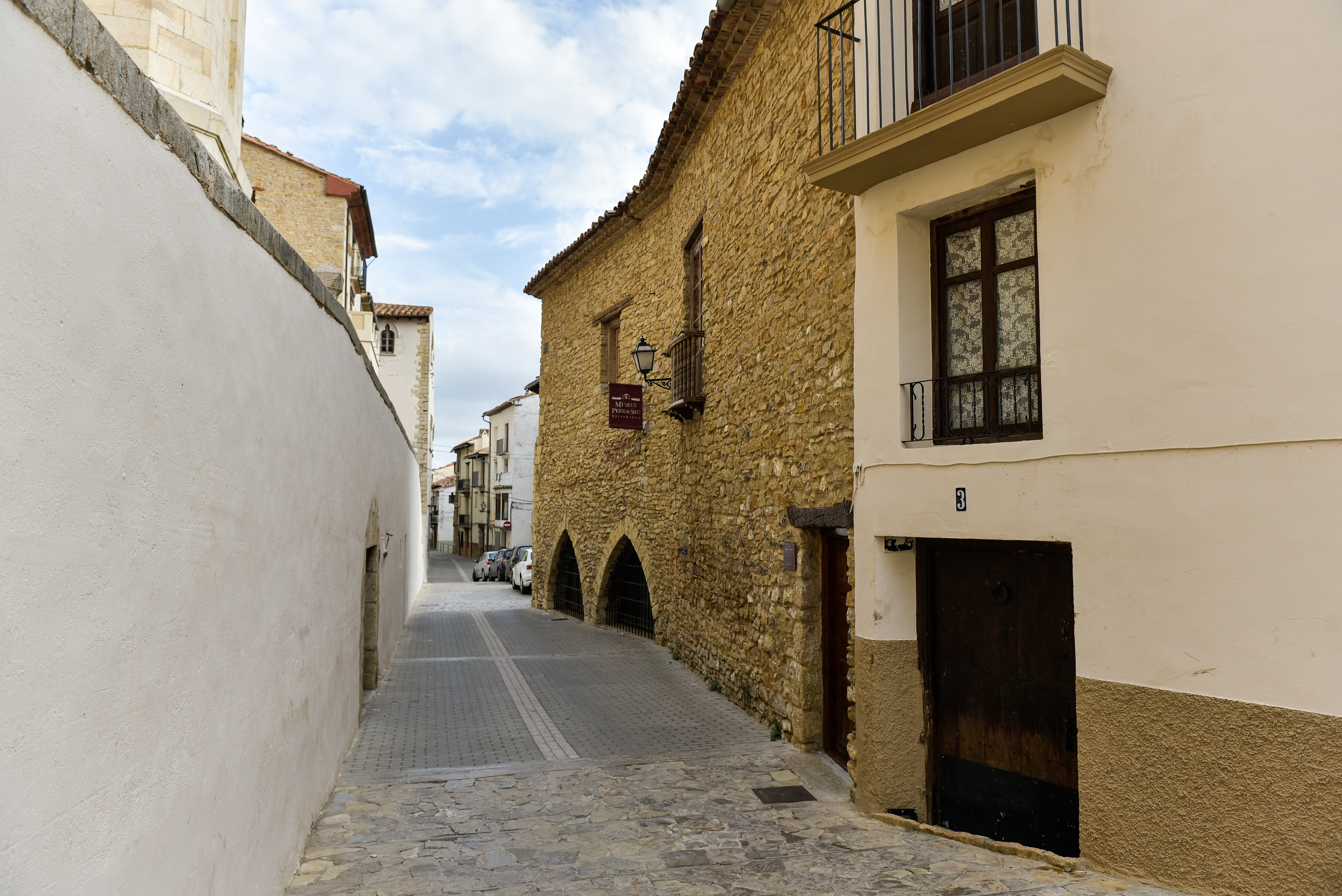 Alcalá de Chivert is a picturesque village, with the Church of San Juan Bautista and its bell tower as main attractions. But most visitors come to see the imposing castle of Chivert, located a few kilometers from the town in the southwestern part of the Sierra de Irta Natural Park. Its enclave is privileged, in the middle of the mountains. It can be reached by car through a narrow dirt road from the main road, always with caution.

Originally from the 11th century during the Muslim period, Chivert Castle underwent various modifications with the Templar reconquest. Today some walls and towers are preserved and inside you can see traces of the different civilizations that inhabited it. In the surroundings there are hiking trails, pine forests and tables to sit and have a picnic. 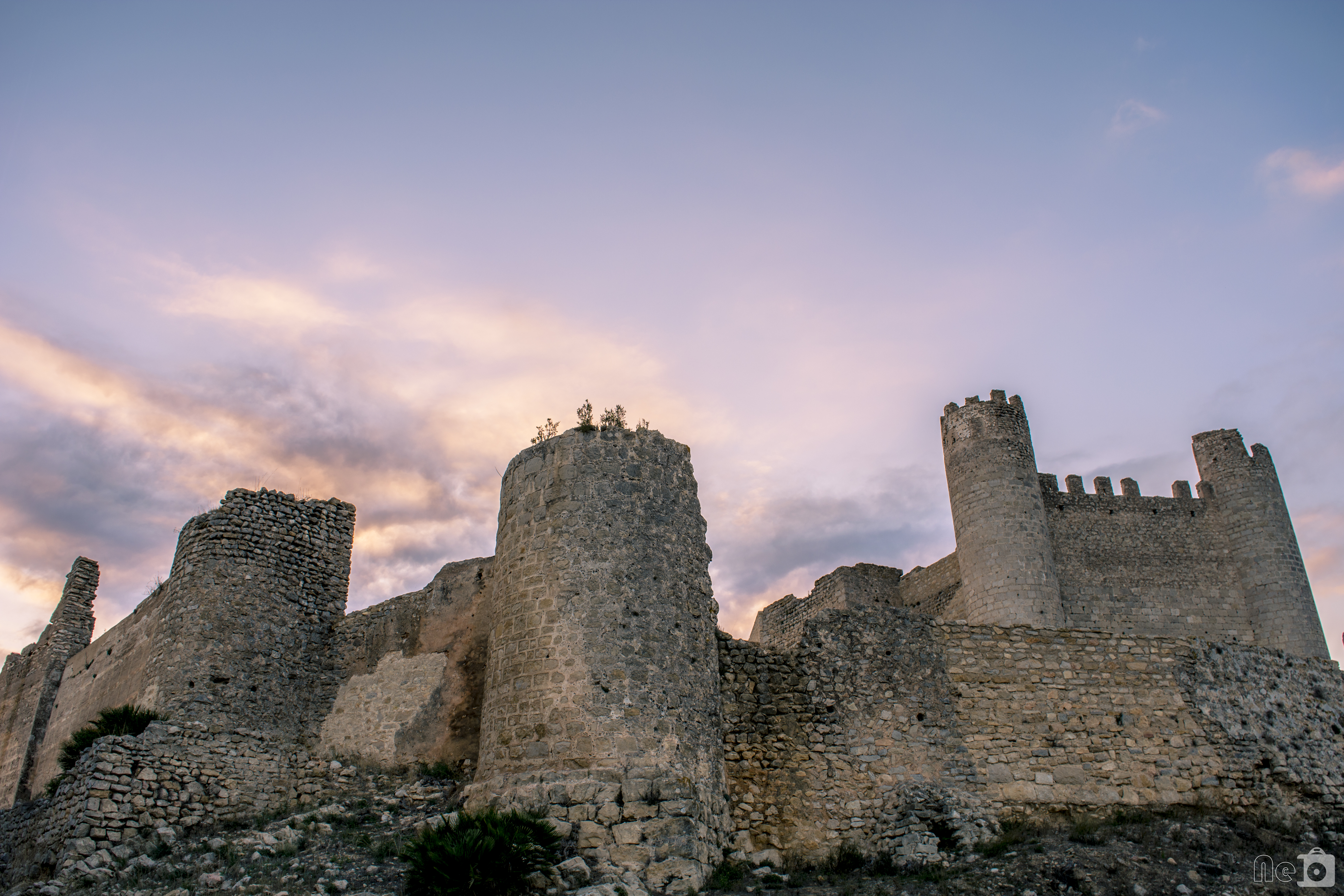 Known as the castle of the Star, it is on top of the hill of Segorbe village, with outstanding views of Castellón countryside. It has free entrance and although inside there is not much left, some towers are preserved. Before the climb to the castle you can see historical relics such as the Torre Del Verdugo, the aqueduct in perfect condition and some walls.

The cathedral of Segorbe is another of the attractions to see in Segorbe. Of great historical importance, inside you can see the cloister, and original paintings and objects in its cathedral museum. Finally, the banks of the river Palancia are ideal for a walk with children and reach the Fountain of the 50 Spouts, where each of the coats of arms of the provinces of Spain are represented. For all these reasons, Segorbe is one of the most beautiful villages of Castellón.

🏨 Check these hotels in Segorbe. 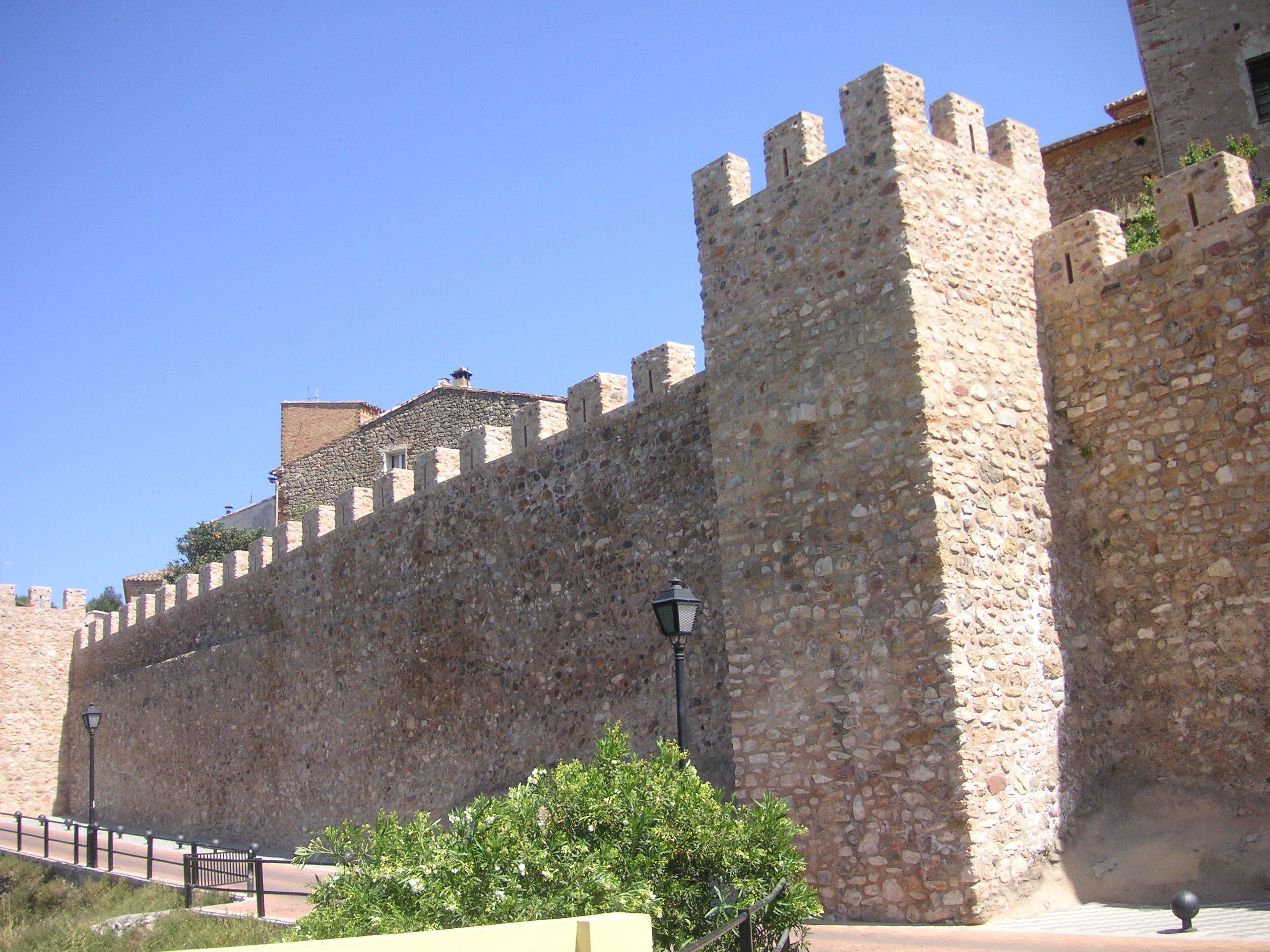 The main attraction of Navajas is not in the buildings or streets of the village, although its old manor houses are worthy of admiration. The Palancia river borders the town and in its course leaves natural wonders such as the Brazal waterfall or popularly called Salto de la Novia (Bride’s waterfall) for the legend that keeps, a waterfall of 30 meters high where you can bathe in the pools of water. In the surroundings there is a picnic area. Dogs are allowed as long as they are on a leash.

The ideal route to get to know all the attractions of Navajas is the so-called Ruta de las Fuentes, a 12-kilometer, four-hour walk that can be done perfectly with children and that starts in the center of the city and goes along the river until it reaches the Salto de la Novia. Along the way there are more than 7 fountains, viewpoints and other smaller waterfalls.

🏨 Check these hotels in Navajas. 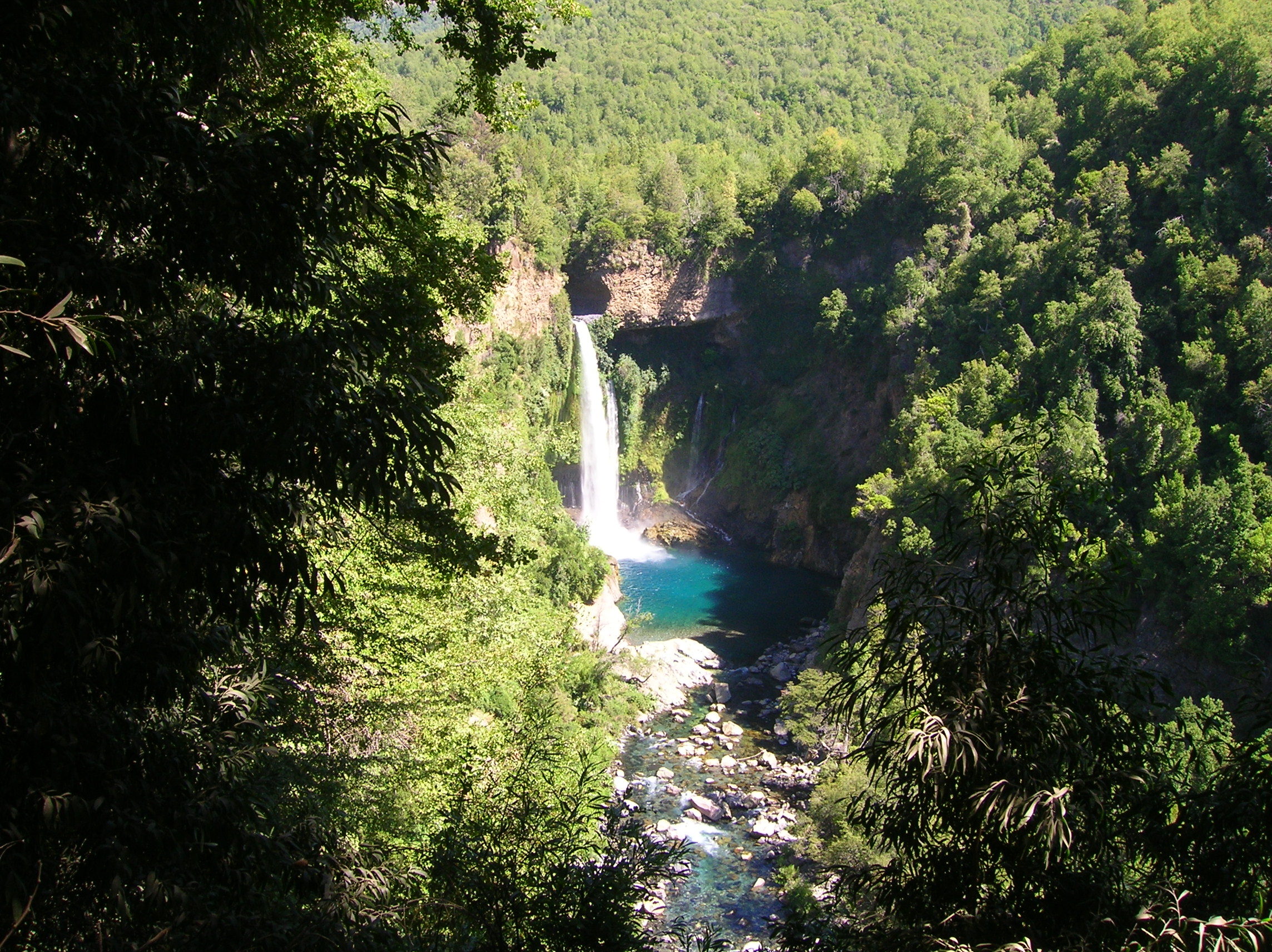 🚑 Take a look at these tips to choose the best travel insurance (updated to 2022) according to the type of traveler you are and, in addition, it will help you clear up the most common doubts. Travel safe!