Are 10 days in Italy enough? Maybe not. But if you only have 10 or 15 days to visit the country of pasta, pizza and gelato, we leave you this spectacular itinerary.

Planning a trip to Italy and don’t know where to go? In this article we recommend an itinerary of 10 days in Italy to visit the capital of the country, and cities in the north and south.

On this route you will discover paradisiacal beaches and islands, mythical canals, the legacy of the Roman Empire, cities of great beauty, historical ruins and the idiosyncrasy of the south. Andiamo?

One of the mythical cities of southern Italy is Naples. With its mix of chaos, bohemian atmosphere, street markets and altars in honor of the patron saints, its old town denotes the passage of time. It’s not as well maintained as in other cities in northern Italy, but retains its beauty, being the Garibaldi square the gateway to the narrow pedestrian streets.

Being on the shores of the Tyrrhenian Sea, Naples has a nice promenade where you will see the Castel Nuovo, built in the 13th century, the Royal Palace and the huge Piazza del Plebiscito, a place of festivities of the locals.

But if there is one thing that distinguishes Naples, it’s the people’s passion for soccer, with its sports idol Diego Armando Maradona. He led the first team to win the UEFA Champions League, leagues and Italian Cups. Such is the idolatry that walking the city center, you will come across many posters and murals of Maradona. The star is for the Neapolitan the person who managed to defeat northern Italy through soccer.

🏨 Check these hotels in Naples.

Day 2: the ancient civilization of Pompeii

Near Naples, Pompeii is a historical relic that you have to visit in Italy in 10 days. It is a civilization that inhabited the area from the 7th century BC to the 1st century AD. Its end was due to the eruption of the Vesuvius volcano that covered the settlement with lava. But for this reason, the fossilized lava naturally preserved the ruins in good condition, which were discovered during the 18th century.

Today you can visit the ancient streets of this civilization that inhabited the place 2000 years ago, the Forum, the Basilica, the amphitheater, and many other places that remain in perfect condition. One of the most striking attractions of Pompeii are the human figures, which due to a casting technique, allow us to contemplate the position in which some people died when the volcano erupted 20 centuries ago.

Day 3: relaxing on the Amalfi Coast

The Amalfi Coast is one of the favorite places to relax by the sea. Charming villages, paradisiacal beaches, blue sea and breathtaking sunsets are some of its qualities. Strolling through the Piazza del Duomo in the town of Amalfi, visiting the Church of Santa Maria dell’Assunta in Positano and contemplating the coast from the different viewpoints are some of the activities to do.

But if there is a visit par excellence to make, that is the island of Capri, a tourist destination that attracts thousands of tourists per year thanks to its beaches, views from the cliffs and the beautiful blue grotto, a cave at the edge of the sea where you can go into the deep blue water.

🏨 Check these hotels in the Amalfi Coast. 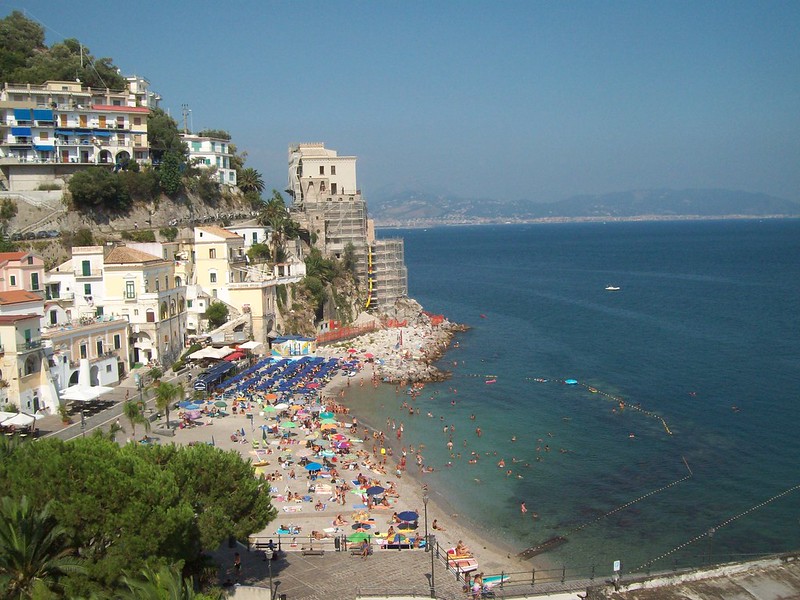 Days 4 and 5: Rome and the vestiges of the Roman Empire

Rome is a must-see if you have 10 days in Italy, in which at least two days should be dedicated (preferable more). The capital is home to a real historical treasure of the Roman Empire such as the Colosseum, Palatine Hill and the Forum. Visiting these attractions is like travelling back in time, when this great civilization was dominant on the European continent for no less than five centuries.

In addition to those already mentioned, there is Castel Sant’Angelo, originally built in the 2nd century as a mausoleum for Emperor Hadrian, and the Pantheon of Agrippa.

The city has plenty of squares and fountains to visit, such as Piazza Venezia with the grandiose monument to Vittorio Emanuele II, Piazza del Popolo, Piazza Spagna with the mythical fountain of Barcaccia by Bernini and the steps leading to the Church of Trinità dei Monti, Piazza Navonna, surrounded by artisan ice cream parlors and restaurants and the splendid Trevi Fountain. In addition, the center is also home to countless churches and museums.

🏨 Check these hotels in Rome.

Although it is an independent state of Italy, the Vatican is located inside Rome and is the main seat of the Roman Catholic Apostolic Church with the Pope as its main figure. One of the sites to visit is the Vatican Museum, which exhibits works of art by renowned artists throughout the centuries, ceilings covered with gold and the impressive Sistine Chapel, painted by Michelangelo and with scenes of the Creation and the Last Judgment.

The Basilica of St. Peter with its bronze altar and the extensive square of the same name can be entered free of charge. The square is the place where the Pope celebrates mass once a week, the perfect moment to get to know him up close and personal.

Finally, you have to climb up to the Basilica’s dome by narrow stairs and watch the spectacular sunset over Rome.

Days 7 and 8: the beauty of Florence and Tuscany

Florence is one of the most romantic cities in Italy. Divided in two by the Arno River, it has magical attractions such as the Cathedral Santa Maria del Fiore, covered with marble in different shades of pink, green and white.

The Ponte Vecchio, where many of Florence’s jewelry shops are located, connects the city center with Michelangelo’s square, a small hill to sit and watch the sunset over the river and the city.

The museums are another of the great protagonists of the city. For us, two of the must-see museums in Florence are the Accademia Gallery, with the sculpture of David by Michelangelo, and the Ufizzi Galleries where you will find impressive works of art by Raphael, Leonardo da Vinci, among other exemplary artists.

The main places to see in Florence can be visited in one day. On the second day it is worthwhile to get away from the city to other places in Tuscany, with more rural landscapes and its renowned wine production in Italy. Among the options are a visit to the Tower of Pisa and a stroll through the villages of the region such as San Gimignano, one of the most beautiful in Tuscany, and Siena with its amazing Cathedral.

🏨 Check these hotels in Florence.

Venice is a small island in a lagoon connected to the mainland by a long bridge. Venice’s charm lies in its canals that run along the island and the ancient buildings where the entrance gates are almost over the water.

Walking to get to St. Mark’s Square, the Basilica and the Doge’s Palace is one of the things to do in Venice. You will cross small bridges over narrow canals, the wonderful Rialto Bridge and narrow streets. If you want to see Venice from another perspective, the best is to sail on the Vaporetto boat on the Grand Canal or with a romantic touch on the gondolas.

On the second day, it is best to embark for the beautiful islands of Burano and Murano. Burano will surprise you for its charm with the facades of the houses painted in different colors on the canal. Murano is world famous for its glass handicrafts. There are many workshops dedicated to this field and you can even buy some objects of this material.

In addition, on the island you have to visit the Grand Canal and churches such as Santa Maria degli Angeli. It is an essential excursion to do from Venice in one day.

🏨 Check these hotels in Venice.

What to visit in Italy in 15 days

Other tour options in Italy

Do you have less time to visit Italy and want to let yourself go on an all-inclusive tour? Check out these options for you:

Useful information to visit Italy in 10 days or more

– Best time to travel to Italy

Although you can travel to Italy at any time of the year, if you want to avoid overcrowded tourism and excessive heat, it is best to avoid the summer season (July and August).

A good time to visit Italy, are the months of spring (April to June) and autumn (September and October). During these months, prices are not as high as in the summer, the weather is pleasant in both the north and south of the country and beach destinations will not be crowded.

However, whatever time of the year you go, you will be surrounded by thousands of other tourists at the Colosseum and Vatican Museum in Rome as well as in the cities of Florence and Venice.

🚑 Take a look at these tips for choosing the best travel insurance (updated to 2023 and with juicy discounts) for the type of traveller you are, and they will also help you clear up the most common doubts. Travel safe!